France has been mobilizing since 2011 to find a solution to the Syrian conflict. Our position has remained unchanged and our priorities are still as follows: 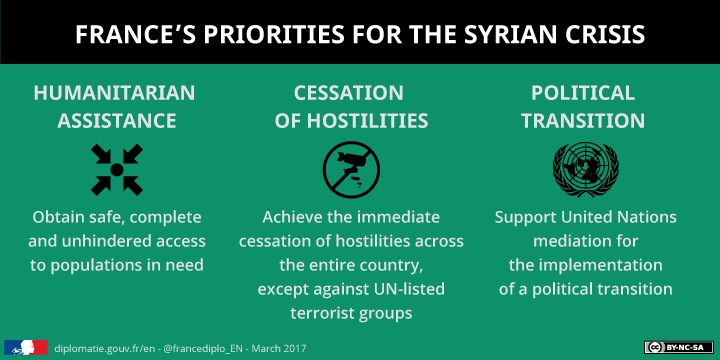 On 19 December 2016, the United Nations Security Council adopted resolution 2328 on the humanitarian situation in Aleppo. This resolution, promoted by France, provides an initial response to the humanitarian emergency in the city. It should make it possible to implement the evacuation of civilians under United Nations supervision, guarantee immediate and unconditional access for humanitarian assistance to populations and ensure the protection of all health workers and facilities throughout the country.

The adoption of resolution 2328 follows up France’s action at the United Nations. France is permanently committed to gaining respect for international humanitarian law in Syria as reaffirmed in particular by Security Council resolutions 2254 (2015) endorsing a road map for a political transition, and 2258 (2015) aimed at facilitating cross-border and cross-line access by humanitarian agencies inside Syria.

Moreover, to avoid resigning ourselves to seeing the Security Council paralyzed when mass atrocities are perpetrated, since 2013 France has suggested regulating the use of the veto. France believes that the veto is not and cannot be a privilege: it involves duties and a special responsibility conferred by the Charter of the United Nations. The right of veto was granted to the five permanent members to foster cooperation among them to enable the United Nations to prevent and resolve international conflicts, ensure effective compliance with international law and protect civilian populations.

For further information on the French proposal

“France’s position has been consistent: the only solution to the conflict is a political outcome with a resumption of negotiations.”

As France has consistently affirmed, there can be no return to stability without a political solution that meets the legitimate aspirations of all Syrians. This solution means holding genuine negotiations under the auspices of the United Nations in Geneva between the Syrian regime and the opposition, then implementing a credible political transition.

The absence of a political transition and the indefinite continuation of the rule of Bashar al-Assad are only worsening the divisions in Syria. Without transition, this country will continue to be fertile ground for the growth of terrorism and a threat to the security of France and Europe; the fighting will also continue on the ground, which will only increase the suffering of the Syrian people and continue to generate more refugees to Europe.

The international community agreed on a political framework to end the Syrian crisis with the adoption of the Geneva Communiqué of 2012 and United Nations Security Council resolution 2254 of December 2015. It is on this basis that inter-Syrian negotiations must resume swiftly, in Geneva, under the auspices of the United Nations Special Envoy.

If these negotiations are to be credible, it is important for all stakeholders across the entire country to respect the truce. Free, continuous and unhindered humanitarian access must also be ensured. That is why France has supported the efforts of Turkey, Iran and Russia with a view to renewing the truce, calling for them to be followed by effects on the ground. International and regional stakeholders must exert pressure in this connection on all parties in Syria.

France is doing its utmost to achieve the implementation of a political solution. On 10 December in Paris, it took the initiative to hold a ministerial meeting focusing on Riyad Hijab, the leader of the moderate opposition and head of the High Negotiations Committee with our closest partners, who reaffirmed their support for resuming negotiations between the opposition and the regime. The Minister is also in close contact with international and regional stakeholders who hold sway regarding the Syrian issue. He visited Riyadh and Tehran at the end of January.

France continues to participate in military action against Daesh. It has engaged its armed forces against the terrorist group in Syria and in Iraq.

For further information on the meeting of like-minded countries

“France’s priority is the fight against terrorism”

At the political level, France remains constantly committed to a transition to achieve a negotiated solution. It is also a question of effectiveness in fighting terrorism: maintaining the Assad regime encourages continued conflict and radicalization of the opposition, sustains refugee flows, destabilizes the region and prevents Syrians from working together to fight terrorism. France is therefore supporting the moderate opposition meeting within the High Negotiations Committee (HNC) which has expressed its commitment to a political solution and to a free Syria.

At the military level, France has been carrying out Operation Chammal (in the framework of the Global Coalition against Daesh) in Iraq since September 2014 and in Syria since September 2015. It carries out air operations, and provides advice and training to Iraqi and particularly Kurdish security forces. France is also providing support to the moderate groups fighting against Daesh in Syria.